EGCG, formally known as epigallocatechin gallate, is a plant-based compound known as catechin. Catechins can be further grouped into a larger group of plant compounds called polyphenols.

EGCG and other related catechins act as potent antioxidants that protect cells from free radical damage.

Free radicals are highly reactive particles that form in your body and can damage your cells when they are present in excessive amounts. Consuming foods high in antioxidants like catechins may help limit the damage caused by free radicals.

In addition, studies have shown that catechins like EGCG may reduce inflammation and prevent certain chronic diseases, including heart disease, diabetes and some cancers.

Test tube, animal and some human studies have shown that EGCG provides many health benefits, including reduced inflammation and improved heart, brain and oral health.

Much of EGCG's reputation comes from its powerful antioxidant capacity and potential to reduce stress and inflammation.

Free radicals are highly reactive particles that can cause damage to your cells. Excessive free radical production can lead to oxidative stress.

As an antioxidant, EGCG protects your cells from damage associated with oxidative stress and inhibits the activity of pro-inflammatory chemicals produced in your body, such as tumor necrosis factor-alpha (TNF-α) (3).

Stress and inflammation are associated with a variety of chronic diseases, including cancer, diabetes and heart disease.

Therefore, the anti-inflammatory and antioxidant effects of EGCG are considered to be one of the main reasons for its wide range of disease prevention applications (1.).

Studies have shown that EGCG in green tea may support heart health by lowering blood pressure, cholesterol and plaque build-up in blood vessels - all major risk factors for heart disease.

In an 8-week study of 33 people, a daily dose of 250 mg of green tea extract containing EGCG resulted in a significant 4.5% reduction in LDL (bad) cholesterol (6.).

Another study of 56 people found significant reductions in blood pressure, cholesterol, and inflammatory markers in those who took 379 mg of green tea extract daily over a 3-month period (7.).

While these results are encouraging, more research is needed to better understand how the EGCG in green tea reduces the risk of heart disease.

In some studies, injections of EGCG significantly improved inflammation, as well as recovery and regeneration of nerve cells in mice with spinal cord injury. (8. & 9.)

In addition, several observational studies in humans have found an association between greater green tea intake and a reduced risk of age-related brain decline, as well as Alzheimer's and Parkinson's disease.

Green tea may protect against tooth decay caused by bacteria. In addition, green tea polyphenols can abolish bad breath by altering the sulfur component of the odor. Oral oxidative stress and inflammation, due to the harmful compounds nicotine and acrolein from smoking and cigarettes, may be reduced in the presence of green tea polyphenols. (10.) 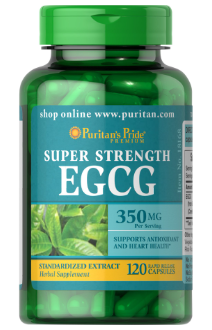 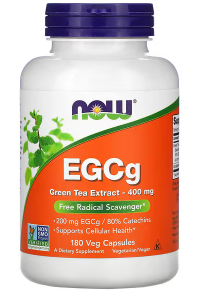 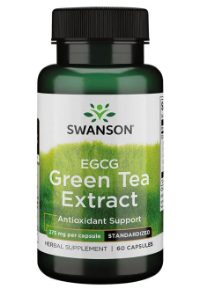 EGCG is a powerful compound that may benefit health by reducing inflammation, helping with weight loss and preventing certain chronic diseases.
It is most abundant in green tea, but is also found in other plant-based foods.
When taken as a supplement, EGCG can occasionally have serious side effects. The safest route is to consult your healthcare provider before adding EGCG to your daily routine to make sure this supplement is right for you.